On Sunday, October 23, 2016 Wim Hof and his team produced a workshop at Treasure Island in the San Francisco Bay Area. It comprised of a gathering of over 200 people who were made up of a combination of WHM practitioners and a few curious souls. In speaking with event organizer Laura Hof (Wim’s daughter), it seems as though upwards of 500 requests were made to attend the gathering but due to limited venue capacity an accommodation was made for slightly over 200.

The workshop would start at 2:30 p.m. with Isabelle Hof (also Wim’s daughter) taking the stage, playing a short video intro to the WHM, and laying out the timeline for the workshop. She would then introduce Wim who would engage the audience with the story of his journey, experiences in climbing sub-zero mountains, and training people up to 76 years of age to do so. He would also discuss the scientific studies surrounding WHM and the drastic changes seen in human physiology from the method.

This is not difficult to fathom as Q4LT has covered the extensive shifts regarding ionic flux, EEG changes, CSF/CBF volumetric changes, DC directional transitions, and so many more that take place from respiratory and retention exercises. We’ve compared WHM techniques with respiration patterns observed during sleep stage cycles… the difference being that you are conscious during WHM and unconscious during sleep.

In speaking with numerous attendants of the workshop, many of them were drawn to WHM from either the Joe Rogan Podcast or the Vice documentary. It once again goes to show the power of the media to distribute a message. In terms of the effects of WHM on some of these attendants I will attempt to relay their perspectives:

Guy #1: “I’ve been doing Kundalini Yoga for a few years now and it’s been a good experience. However, it used to take me an hour to get into a deep state of meditation and now that I include WHM for 10 minutes prior, it takes me only 20 minutes to go even deeper than before. Definitely a game changer!”

Guy #2: “I’m a type 1 diabetic and had been on half a dozen medications to control it. The meds always left me feeling like shit. I literally stumbled across the WHM from a customer one night (Guy #2 is a bartender) and looked it up. It’s been life changing as it’s helped on literally every level I can imagine… emotionally, physically, mentally. I was able to drop the meds and have much more control over my own health. I’m not saying I’m diabetes free but I feel so much better let’s put it that way. I want to share WHM with as many people as I can!”

Guy #3: “I’ve been meditating for years now and WHM helps me go so much deeper and faster. To me it’s amazing that more people don’t know about this thing. People just need to try it and experience it and then I think they’ll understand the potential.”

Girl #1: “I’ve been studying different forms of breathwork and WHM caught my eye based on the many testimonials. I’m curious to try it out and see the effects.”

Guy #4: “WHM seems to be one of the quickest ways to literally change yourself. I feel so much more stable emotionally after having done it for 3 months. I take regular swims in the SF Bay now and it feels great. Having control over your own body and health is so important in this day and age. I can’t wait to get in the ice pool and see if I can handle the cold compared to the bay water!”

Girl #2: “I’m here because my boyfriend said I should check it out.”

These are just a few conversations I had with people throughout the workshop as it’s always intriguing to get first hand perspective of the methodology of not only WHM but how people became aware of it.

Dr. Andrew Huberman a neuroscientist from Stanford University attended the workshop as Wim’s special guest and would provide commentary on some of the scientific data regarding WHM. Huberman would also speak about the benefits of cold exposure and his journey to Spain to meet “The Iceman” himself. 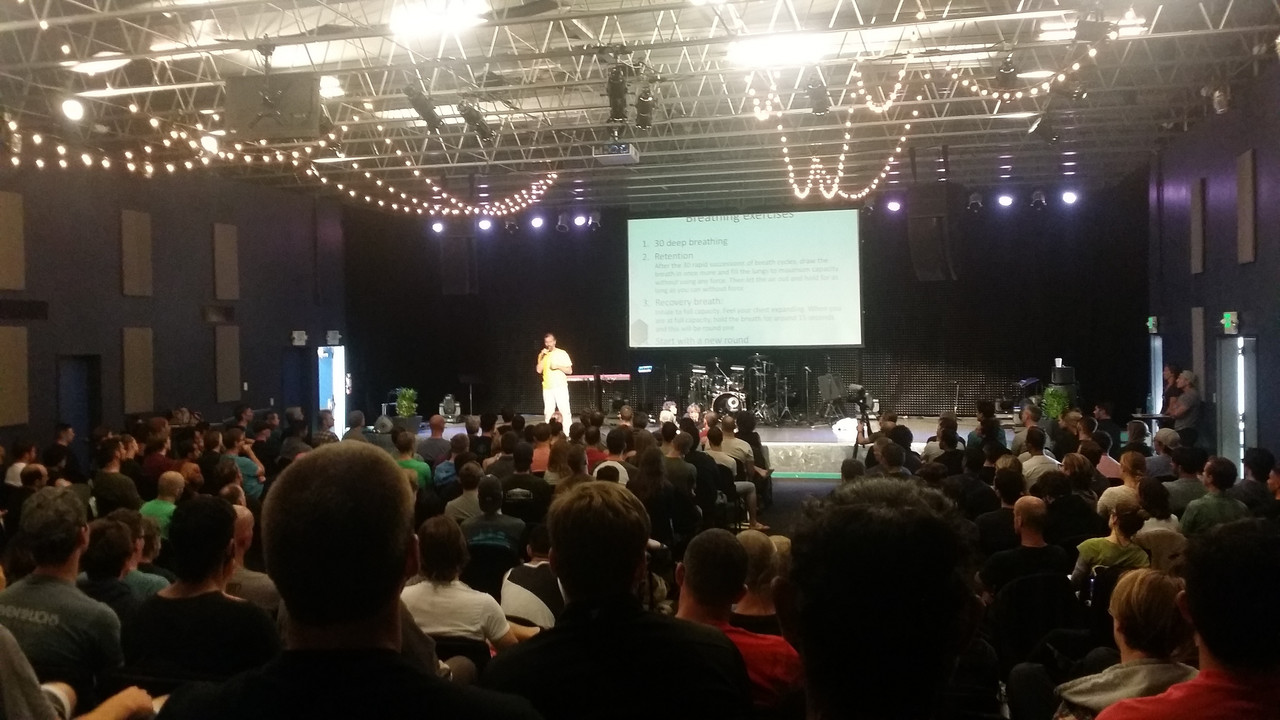 After Wim would provide context to himself and his journey to develop his method, he would then give a brief description of how to do the basics of WHM. He would lead the group through 3 rounds of breathing exercises followed by breath retention after exhalation. According to some testimonials by the 3rd round some people were able to surpass 3 minutes of breath retention.

It’s interesting to surmise the potential dam-like energetic effects of the breathing rounds in terms of increasing the cerebrospinal fluid (CSF) volume in the brain cavity while the retention phase creates a surge of cerebral blood flow (CBF). The words “concentration gradient” come to mind in terms of making the “magic” happen.

Following the breathing rounds the workshop would head into it’s first break were people would grab lunch and engage in informal discussion with Wim in regards to their experiences. It was intriguing to see testimonial after testimonial of how WHM effected each person in a positive manner. This isn’t to say that WHM will necessarily benefit everyone… but on the other hand it’s difficult to fathom how it cannot help based on the closely related mechanisms of the sleep cycle and it’s undeniable systemic benefits. The day somebody tells me sleep is “bad” for a person is the day I cease from engaging in discussion altogether.

Following lunch both Wim and Dr. Huberman would speak about the benefits of brown fat in the body and how children naturally exude much higher levels than adults. Wim would speak about a variation of his technique in order to specifically induce “brown fat activation”. This would appear to be in preparation for the ice plunge.

Wim would then announce that he had learned a special chanting method from secret mystics that he would like to share with the group. He stated that it had taken some time to translate the chanting into English but that it would be of tremendous help to endure the cold. He would then break into his rendition of… “Somewhere Over the Rainbow”. This drew huge laughs and applauds from the crowd.

At this point the crowd began to change into their bathing suits ready to embrace the cold that the “Iceman” has embraced for many years. There were 3 swimming pools filled to the brim with ice. Then in groups of 7 people would take the plunge into the pool (feet first) and proceed to sit in there for the duration of a verse from “Somewhere Over the Rainbow”. Some people exuded zen-like control over the cold while others shivered quite vividly. Nevertheless the majority of the group took the plunge and everyone seemed to enjoy the unfamiliar rush of observing their own bodies in such an extreme environment. 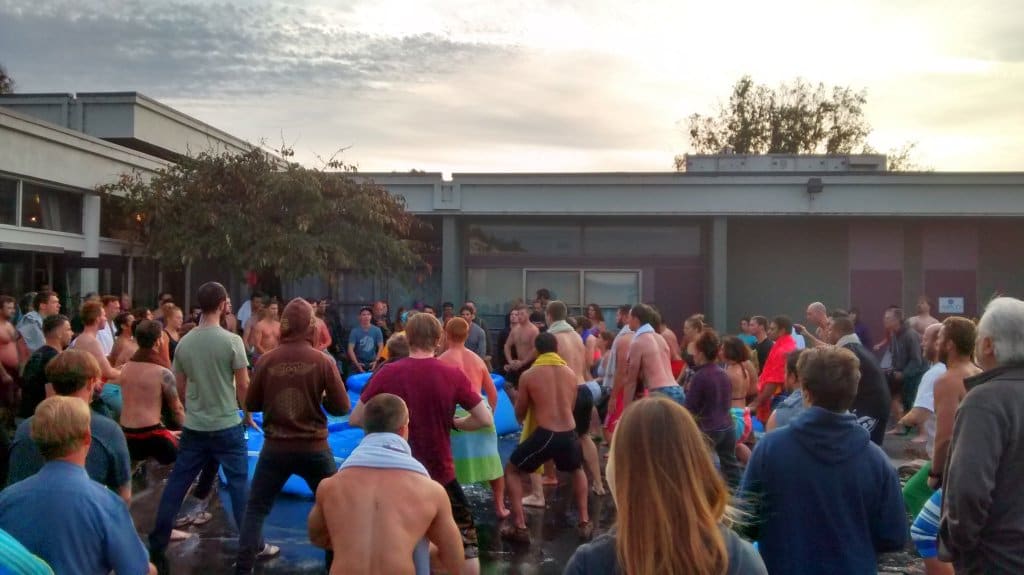 Following the ice plunge, the final segment of the workshop would take place in which there was a Q&A segment with Wim and Dr. Huberman. The crowd bombarded them with many different questions pertaining to health, metabolism, effects on specific aspects of biology, and the future of WHM.

One attendant would ask Wim specifically about integrating diet with WHM and Wim would ask his friend Dr. Edith Ubuntu Chan up on stage to speak about the subject. Dr. Chan would discuss some of the marked changes in appetite from respiratory exercises. She asked the crowd if anyone had noticed a significant decrease in hunger from utilizing WHM and roughly 70 to 80% of the crowd raised their hands. She mentioned the concepts of the body being able to tap into alternative energy sources which allow a person to not only eat less but also maintain a high energy level.

A few questions later and the workshop ended with rousing applause.

Overall the workshop was very informative and entertaining as Wim tends to channel his inner “Andrew Dice Clay” from time to time keeping the audience on their toes. Everyone was able to get pictures with him and share their stories with him on a personal level. I think that this is what separates Mr. Hof from many “gurus” which is his down to earth nature, anti-guru style, and legitimate enthusiasm to hear everyone’s story. I give much credit to his daughters (Laura and Isabelle) for foregoing the larger crowd in order to maintain an intimate setting where everyone had a chance to interact with Wim.

At the end of the workshop I’d speak with Wim regarding the “secret project” and the concept of endogenous DMT in the body. It’s naturally a study that needs to take place and will play a huge role in understanding the mechanisms of the magic behind the WHM and possibly many others.

Cheers to Wim and his team for living their truths! The journey has been a long one but at the same time it feels like it’s only just begun.

Let’s keep this short and as sweet as possible. Dimethyltryptamine also known as “DMT” has received much interest in recent times due to the documentary “DMT: The Spirit Molecule” as well as Dr. Rick Strassman’s book. In Strassman’s... Continue →